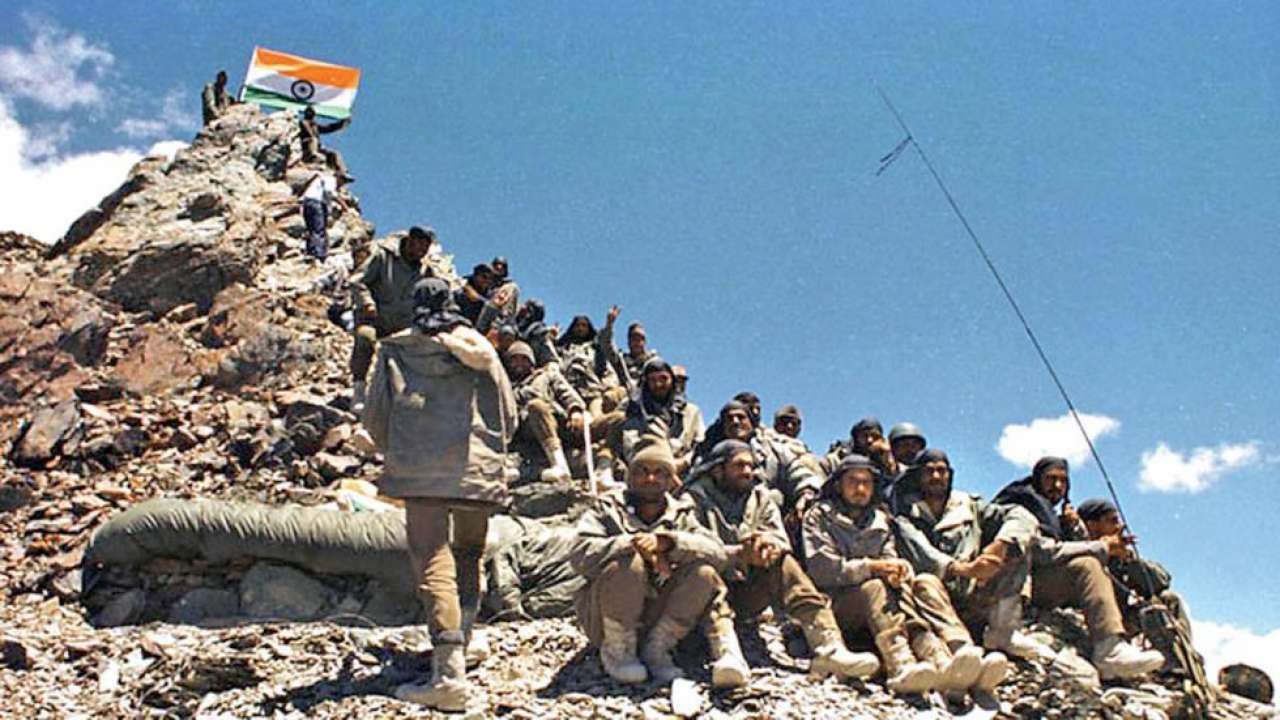 India has had to fight countless battles in her history to maintain her existence with pride and dignity.
But one such huge military conflict of its own kind , took place about 5G and 23 years ago in Kargil,
Ladakh.

The Pakistani had intruded upto 4-10 kms into the Indian territory and had occupied more than 130
winter vacated posts of the Indian Army. This was possible because at that point of time there was only
one brigade with three units of the Indian Army deployed along the 300 kms of LoC between Zojila and
Leh. That meant one unit of our Army was responsible for more than a 100 kms which was close to
impossible and hence the intrusion took place in Mushkoh, Dras, Batalik, Turtuk and Kargil sub sectors.
These sectors are very important for the logistics requirements of the Indian Army from Zojila to
Siachen, the world’s highest battlefield. Also there was no high tech surveillance or Unmanned Aerial
Vehicles back then along the LoC. Pakistani wanted to cut off our Highway connecting Srinagar to Leh
thereby cutting off Ladakh and Siachen from India !

Initially the locals and the Indian Army thought the intruders are some militants but soon it was realised that it is the Pakistani Army Soldiers occupying the posts and are holding onto an upper ground with adequate and advanced weaponry. Intelligence sources and Observations by the locals confirmed the presence of Pakistan’s Northern Light Infantry soldiers.

The first action was Capt. Saurabh Kalia and his patrol party men being killed in action by the tortures of the Pakistani Army .

The Army then conveyed the information to the centre and then OPERATION VIJAY was launched by the Indian Army on May 3, 1999.

The first responding units like 18 Grenadiers took a huge blow of massive casualties losing 40 soldiers
with more than 100 battle injured and the Army Commanders were stumped and had no idea about the
exact area of intrusions and the number of intruders. Although within few days when the Bofors Guns
had arrived the 18 Grenadiers did recapture the infamous TIGER HILL. And the Battalion’s then Grenadier now Sub.Maj. Hon. Captain (Retd.) Y.S. Yadav was awarded with the country’s highest military
decoration the PARAM VEER CHAKRA.

The peak of Tololing was recaptured by the 2nd Rajputana Rifles. Likes of Major Padmapani Acharya,
MVC(P) , Major Vivek Gupta,MVC(P) and Capt. Vijayant Thapar, Vrc(P) made the supreme sacrifice for
the mission.

When locating the intruders became a total headache for the Indian Army the Indian Air Force was
tasked to assist the Foot Soldiers in eliminating and flushing the intruders off the valley. The then Air
Chief A.Y. Tipnis got quickly in action and launched the OPERATION SAFED SAGAR on May 26th ,1999.
The IAF was urged by the then PM Vajpayee to attack the enemy ONLY WITHIN THE LOC and not beyond it , which in itself becomes a huge challenge since the target areas were only at 5 to 12 kms from the LoC.

The IAF had never even exercised at the height of 18,000ft at which it was now tasked to operate
upon at a short notice of just few days. However the IAF swiftly got into the action. The attack, recce
and logistical fleet from the Western Command included the MiG-21, MiG -23, MiG -25, MiG- 27,MiG-29
Fulcrum armed with Beyond Visual Range Missiles, Jaguars and Mirage 2000Hs armed with day and
night laser- guided bombs, Mi-17s and the Cheetah. Initially, the IAF got some major setbacks in the
form of losing a MiG-17 , a MiG-27 and a Mi-17 attack helicopter. That was when the Indian Air Force
played its trump card and the Mirage-2000H was brought in to conduct the Airstrikes by the first week of June.

The makeshift innovation of Mirage with Laser Guided Bombs turned out to be lethal for the
Pakistanis and infact broke the back of their supply lines. The Mirage Airstrike at Muntho Dhalo Pakistan Army Supply Base alone caused more than 180 casualties within 2 minutes.

A world record for a war of such kind as they followed the instructions of staying and attacking
within the LoC , impeccably well.

Meanwhile the areas of Jubar ,Kukartham and Khalubar were recaptured by the 1/11 Gorkha Rifles due
to the heroics of the legendary Indian Army Officer Captain Manoj Kumar Pandey, Paramveer
Chakra(Posthumously) who almost single handedly destroyed 4 enemy bunkers at the Khalubar Top in
broad daylight amidst the unnervingly accurate showers of Medium Machine Gun rounds and rockets by
the enemy. The 1/11 Gorkha Rifles was being commanded by Col.(Retd.) Lalit Rai, VrC in the Kargil War.
13 Jammu and Kashmir Rifles (13 JAKRIF) did the task of recapturing Point 5140 and Point 4875. With
Capt.Vikram Batra,PVC(P) and then Rifleman now Subedar Sanjay Kumar ,PVC getting awarded with the
country’s highest military decoration.

Capt. Batra,PVC(P) is a household name across the nation for his undaunted courage and gallant actions
even beyond the call of duty.

The Indian Navy had launched Operation Talwar to seize and counter Pakistan’s movements in the
Arabian Sea. It was a clear demonstration of intent and capability of the Indian Navy so as to this extent
that when Pakistani authorities started hushing the N word, the Indian Navy responded by moving ships
closer to the the Pakistani Coast of Karachi. It was the largest deployment of the Naval Combatant Fleet
ever, in the Arabian Sea. As much as 30 combatant ships were reported to be at the doorsteps of the
Karachi Port.

Despite being up against all odds and losing a total of 527 soldiers and with 1367 being battle injured ,
the Indian Armed Forces registered their clear, historical and emphatic victory over the Pakistani Forces
on 26th of July, 1999, that is this day 23 years ago.
Jai Hind. 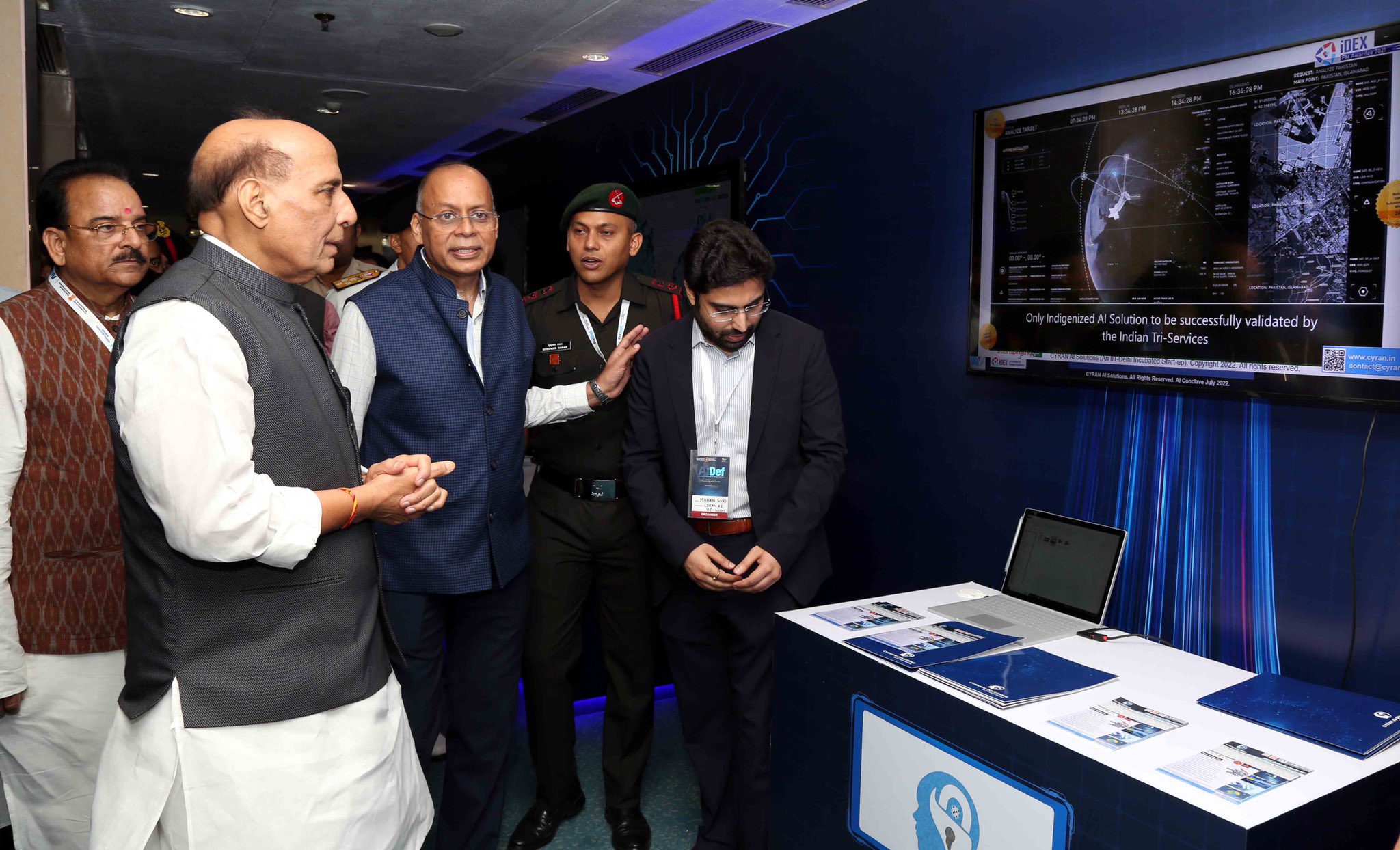 The Defence Minister Mr. Singh has also launched both electronic and physical versions of books containing details of the 75 products exhibited during the symposium. He also described how the way of AI-based technology is taking a “revolutionary step” in developing humanity. AI-based technologies have been introduced in the sector of health, medicine, agriculture trade, commerce, transport, and now in defense with a hope to bring radical changes in the coming future.

He said, “When there has been full human participation in wars, new autonomous weapons/systems have been developed with the help of AI applications. They can destroy enemy establishments without human control. AI-enabled military devices are capable of handling large amounts of data efficiently. It is also proving to be very helpful in training the soldiers. In the coming times, Augmented and Virtual Reality technologies will also be used effectively.”

The Defence Ministry appreciated the efforts of the Armed Forces, DRDO, and DPSUs in providing innovative and indigenous AI solutions for defense and future technologies to ensure social welfare, national security and create a ‘Global Hub for AI’ in India.

Mr. Singh added more about AI influence in defense saying, “We have started incorporation of AI applications in remote piloted, unmanned aerial vehicles, etc. There is a need to move further in this direction so that we can develop autonomous weapon systems. The timely infusion of technologies like AI and Big Data in the defense sector is of utmost importance so that we are not left behind the technology curve and are able to take maximum advantage of technology for our services.

The Ministry of Defence has also added that they will provide Rs. 35,000 crores to boost the domestic industry’s production by 2025. Public sector industry such as Bharat Electronics Ltd and private sector industry named Indo-MM was conferred ‘Raksha Niryat Ratna’ award for achieving the highest defense exports in recent years. The program also initiated the GenNext AI competition among students to scout innovative ideas for future AI solutions.

Prosecution of Army troops engaged in the atrocities in Nagaland, the Centre advised

The results of a special investigation team (SIT) have been made public, and a rights group has requested that the Centre authorize the prosecution of Army servicemen who were discovered to have been responsible for the massacre of civilians in Nagaland’s Mon area in 2021.

On December 4, 2021, soldiers from an elite Army unit ambushed a village near Oting and fatally shot 13 residents. On December 5, an angry mob protesting the Oting killings was shot and killed by Assam Rifles men in Mon, the district’s administrative centre.

According to the People’s Union for Democratic Rights (PUDR), the Nagaland government-established SIT finished its investigation into the massacre in March, turned in its charge sheet in the middle of April, and presented its final report to a local court in Mon in May. In its charge sheet, the SIT named 30 Army personnel.

“The SIT has been waiting for Department of Military Affairs approval to move forward with prosecution since April. More significantly, the Nagaland Chief Minister stated in early March that the SIT findings would only be made public once the Centre granted authorization to prosecute, according to a statement released on Friday by PUDR secretaries Deepika Tandon and Shahana Bhattacharya.

The Oting event had also been the subject of an independent investigation by the Army. However, it is not required to disclose its results. The PUDR asserted that the SIT had charged the Army on numerous grounds in its 300-page report and demanded that the Centre authorize the prosecution of the guilty Army soldiers.

According to the PUDR, the Centre’s approval is required before bringing legal action against Army troops. It referenced a Rajya Sabha report that stated that eight of the 30 requests for the prosecution that the Centre received from 1991 to 2015 were still pending.