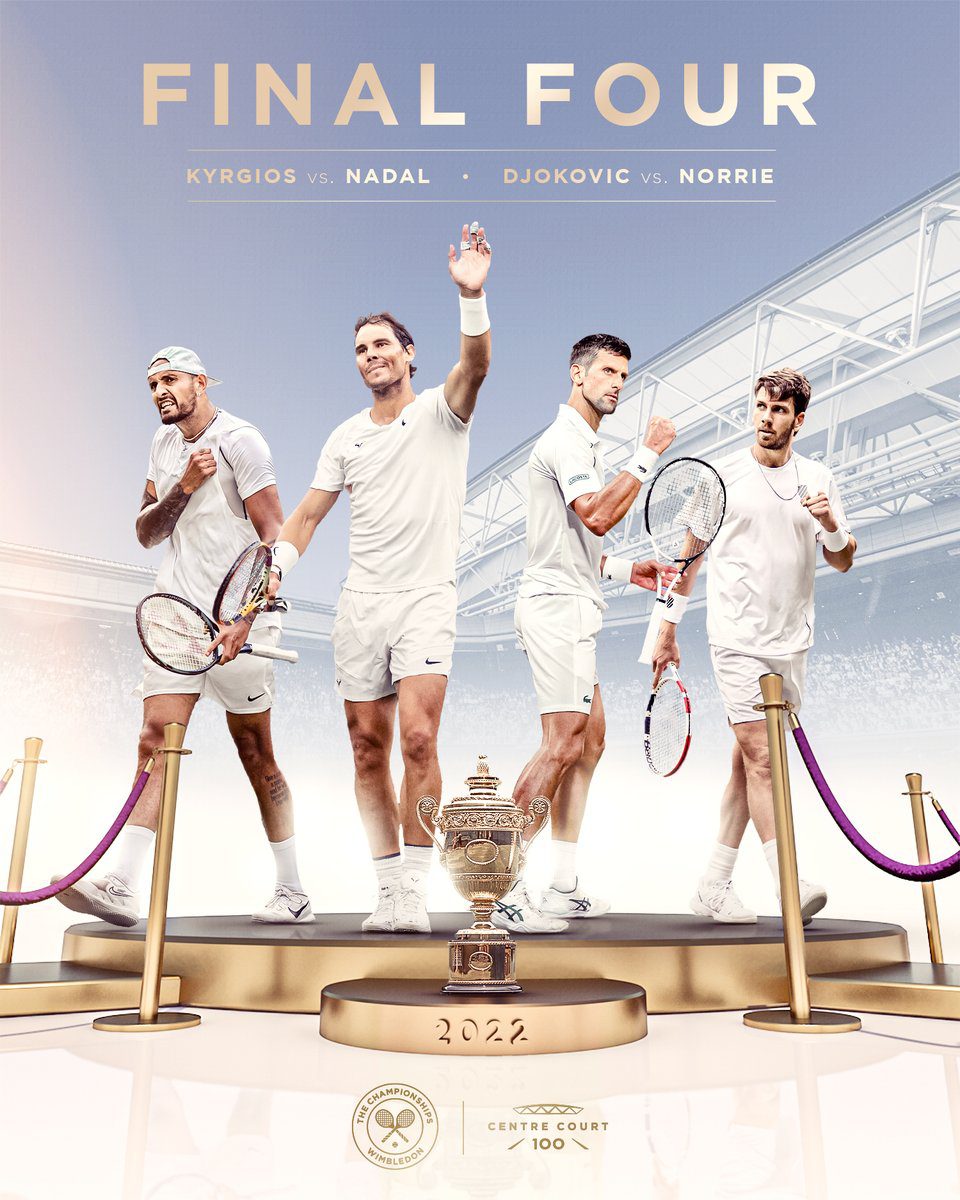 Often hailed as one of the most prestigious tournaments in Tennis, this year too Wimbledon commenced from June 10 onwards and is slated to end with the final coming on July 10th. Till the battle so far, the Wimbledon championships have got its leading contenders for the semifinals.  To everyone’s surprise this year Roger Federer whose name is synonymous with the British tennis tournament with the most titles (8)  is absent since the recovery from the knee surgery has taken more time than expected. But nevertheless, the Wimbledon 2022 saga has still turned out to be a rollercoaster ride from every sphere leaving the audience delighted.

On Friday, in the first semifinal of Men’s Singles, the Bad Boy of Tennis Nick Kyrgios will face off the World No 4 Rafael Nadal who is competing for a Calendar grand slam. As of now, Nadal aces the H2H records with 6-3 while the tally getting closer to 2-1 in the Grand Slam faceoffs. Lastly, when Nadal defeated Kyrgios in the Grass courts, it was the 2nd Round of Wimbledon 2019 but  not to forget the potential which Nick Krygios carries when the, then 19 year old  gave the Spaniard run for the money by stunning the, then No 1 Rafael Nadal in the 4th Round of Wimbledon 2014 in 5 sets with a ranking as low as 144 and entering as the Wild Card contestant.

Given Rafa’s current form and Krygios performing to his potential in recent times, the result could flip in either flank. With all close encounters so far with Greek No 1 Stefanos Tsitsipas, Brandon Nakashima and Chilean C Garin just to end up in a winning cause will undoubtedly make the Nick Krygios to be ready for Somerset. Still, the Nadal in this Wimbledon has certainly answered the critics why he is not only confined to clay and has defeated the Sonego, Zandschulp and the Taylor Fritz most recently in the Round of 16 taking the match to 5th set’s tiebreaker. Thus, leaving out everyone stunned in the crowd by reaching the Wimbledon SF. But could be alarming is the abdominal injury which Rafa picked up in the match against Fritz which if turns out to be serious could deny Rafa a run for his 3rd Wimbledon title.

The other Centre Court for the 2nd SemiFinal will witness the battle between the defending Champion Novak Djokovic and the sole contender of Britain in Cameron Norrie who will look to exploit the Djoker’s game and enter his maiden Wimbledon Final. While Djokovic is said to be deemed as favourite,

Cameroon Norrie can be laced with a southpaw and home advantage of playing in front of the crowd. While the Djokovic defeated Kokkinakis in straight sets in 2nd round, compatriot Kecmanovic in 3rd round and T Van Rijthoven in Round of 16 to come so far, it has been Norrie who have impressed everyone by exploiting Spaniard J Munar in 2nd Round and american rivals Steve Johnson and Tommy Paul respectively to barge into his maiden Wimbledon SF.

Catch the Wimbledon 2022 live on Star Sports India Network across Star Sports 1 and Star Sports Select 1 & 2. Viewers can also stream the matches live on the Disney Hotstar. Catch the Coverage of the Epic Wimbledon Semi Finals and check on your predictions. Will Wimbledon witness the Epic Rivalry of Rafael Nadal & Novak Djokovic in the Final or the likes of Newcomers in Cameron Norrie & Nick Krygios are there to surprise everyone for going into the Final. 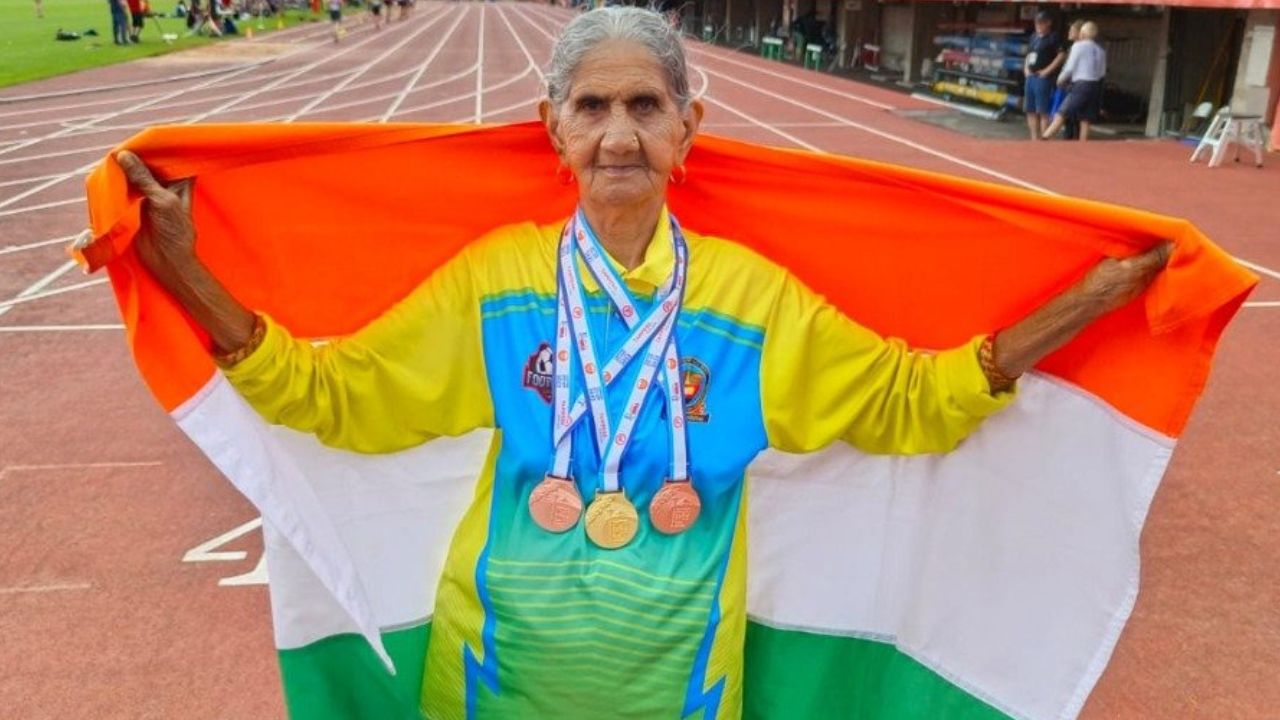 The 94-year-old Bhagvani Devi Dadar created history and showed the world that age is never a barrier when she clinched the gold medal in 100m sprint at the World Masters Athletics Championships held in Tampere. The 94-year-old from Haryana ran 100 metres in 24.74 seconds to clinch the gold and also bagged a bronze in shot put.

The Department of Sports, Ministry of Youth Affairs and Sports tweeted. “India’s 94-year-old #BhagwaniDevi Ji has yet again proved that age is no bar! She won a GOLD medal at the #WorldMastersAthleticsChampionships in Tampere in the 100m sprint event with a timing of 24.74 seconds. She also bagged a BRONZE in Shot put. Truly commendable effort!,”

“Hearty congratulations and best wishes to Bhagwani Devi, who became an inspiration to the whole world at the age of 94 on winning three medals, including a gold, in the World Masters Athletics Championships in Finland.”

“This great achievement of yours will create more enthusiasm towards sports among the youth,” the Governor said in a tweet in Hindi. 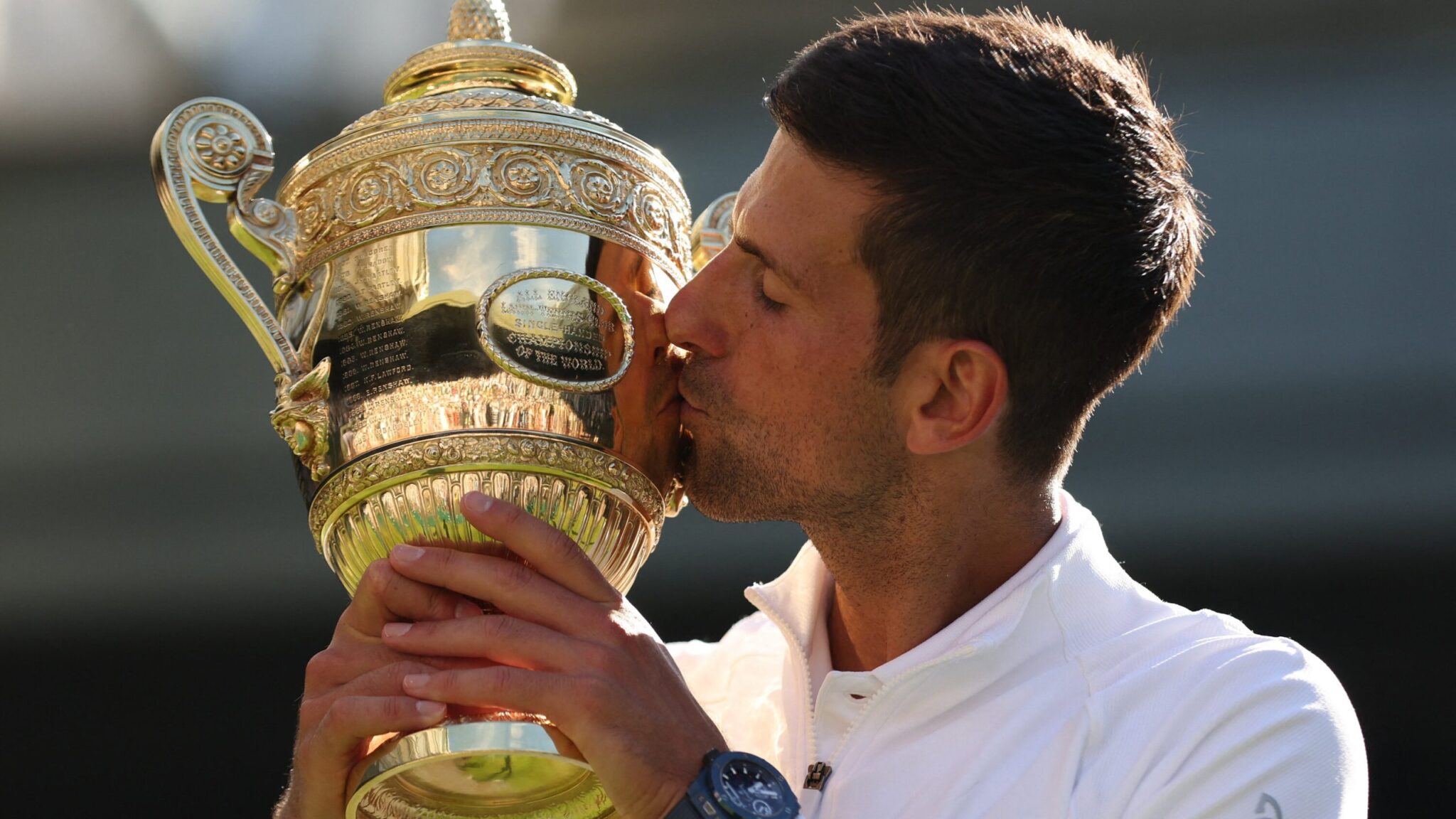 On Sunday, 10th July 2022, the epic battle for the Wimbledon trophy for the men’s singles was played between World No.7 Novak Djokovic and the 45 ranks seeded Aussie Nick Krygios. The Gentlemen’s Singles final lasted for 4 sets in which the 6 times Serbian emerged victorious. Novak defeated Krygios 4-6, 6-3, 6-4, 7-6 ( 7/3 ) to clinch his 21st Grand slam, just one behind Nadal’s overall 22.

In the 1st set, Nick Krygios looked in his beast mode by playing out a sharp serve and volley game. Throughout the set, Djokovic had no answer for the aces. Thus, Krygios won the set by 6-4 making Djokovic get into the backseat.

But in the next set, Djokovic was in his true self exploiting the weakness of Krygios’s weak backhand and making him go for unforced errors. Most of the drop shots from Djokovic had no answer from Krygios’s end. The trailing Djokovic in the 1st set made it to 5-3 in the second set before scoring the advantage from the serve to seal the set with 6-3.

In the 3rd set, the bad boy Krygios once again looked lethal with the serve to begin and got the 1st break point with an excellent drop shot in the left flank of the court which even made Djokovic appreciate him. But Djokovic used his vast experience of GS finals to make it 4-4 and won with the final set result of 6-4 with the serve which Nick Krygios made it out of the line.

The decider 4th set witnessed a highly motivated Djoker but a more than intense Krygios who made the set go for a Match tie-breaker. But in the clutch tie-breaker, the man of Clutch sets- Djokovic used his brilliance to gain the 7 points against the loss of 2 just to end up lifting the title.

Given the match result, it is safer to say that Krygios was let down in the same manner as expected in the clutch sets. Picking up argument with the chair umpire in the the typical hot tempered Krygios style and getting an emotional meltdown once the Djokovic won 2 sets in a row made Mr. Wild Thing hysterical towards Novak’s box. What makes it evident is the Post Match Conference when Noval told ESPN that Nick lost it in the moment when the 3rd set was tied with 4-4 and Krygios leading with 40-0 but then a recurring summary of unforced errors in a row with dropping a volley, double fault and unsuccessful backhand of Nick hitting the net made it 5-4 and made Djoker almost closer to the match.

Djokovic said- “I didn’t win it, he lost that game with his unforced errors. I stayed there, pushed him to the limit and got the reward.”

The suggestion that Kyrgios “lost it” will haunt Kyrgios for the rest of his career. But the Aussie must be proud of playing to his potential even after getting a walkover against Rafael Nadal due to the latter’s abdominal injury. So far Nick led the H2H record with 2-0 which is now 2-1.

On March 29, the BCCI made an announcement to release a tender for the Media Rights Cycle of the Indian Premier League ( IPL ). Therefore, On June 13, 2022 commenced the high octane battle for the IPL Media rights between big giants. The E-Auction comprised primarily the Linear & Digital Rights for the IPL for a 5 year cycle which meant that the broadcasting giants would 20be holding the rights reserved from 2022 to 2027.

As per the Sports marketing analysts, the Day 1 saw the bidding valuation surpassing over 43,000 crore landmark, also making the 100 crore rights ( Digital + Television ) surpassed in a record move. What was special about Day 1 was a record 1.2 x jump over the final bidding at the end of the Day of 43,000 crores against the base price set by the BCCI at Rs 32,890 crores and was almost twice the 5 years Cycle Valuation made by the Star India Group from 2017- 2022 at 16,438 crores.

However it was on Day 2 when the biggest T20 League in the world got its purchaser with none other than Sony Entertainment Television ( SET ). With the tough competition from the potential giants such as Star Group, Viacom 18, Essel Zee Group, it was the SET group who fetched the TV rights for the record amount of Rs 23,575 crore whereas it was Viacom 18 backed by the Reliance Entertainment that secured the Digital Streaming rights for a whopping amount of Rs 20,500 Crores. Thus, bringing up the combined TV & streaming rights per match to Rs 107.5 crore. As part of the deal, Sony Group will receive Rs 57.5 crore per game whereas the remaining 50 crores will be secured by Reliance Entertainment.

Not only it has surprised the expectations but also has broken the record by overtaking the biggest football league in the world- EPL ( 84 crores ) sitting just behind the NBA league valuation / match.

It also has made the BCCI, the biggest Cricket governing body in the world who now is set to enjoy the perk of earning from the biggest league in the Indian subcontinent. All thanks to the leadership which Sourav Ganguly has shown throughout the auction.

Now what it means to the subscribers and dear audiences is that the glory days of the IPL are said to be back. Remember the time when IPL used to have a great blend of audience, glamorous cheerleaders, divas like Archana Vijay, Karishma Kotak interviewing the big names, the Danny Morrison’s humor as the pitch curator preceded by the Official annual slogan be it ‘Ek India Happy wala’, ‘Dil Jumping Japang’ or ‘Come on Bulawa Aaya hai’, the on-mic conversation of the on-field fielder with the sports commentator, the Siddhu & Aakash Chopra’s mic skills and what not.

Well, the list will never end. The IPL is set to regain its glory since the Sony group will be aware of the majors of the IPL which outplayed the Big Bash , Caribbean premier league in its prime. How successful Sony will be in its 2nd Inning of IPL, only time will tell. But let us just tell our viewers that the Media rights purchase means that the official broadcaster in the TV will be Sony making Set Max, Sony Six & Ten Sports to be eligible for the broadcast ( excluding Sony Liv )

whereas the Live match broadcast in the OTT platform will be streamed on the VOOT ( Viacom 18 group ) app. Therefore, the premium subscription of the Voot will be required to stream your matches digitally or possibly the JIO TV shall allow the access of the matches to the jio customers.