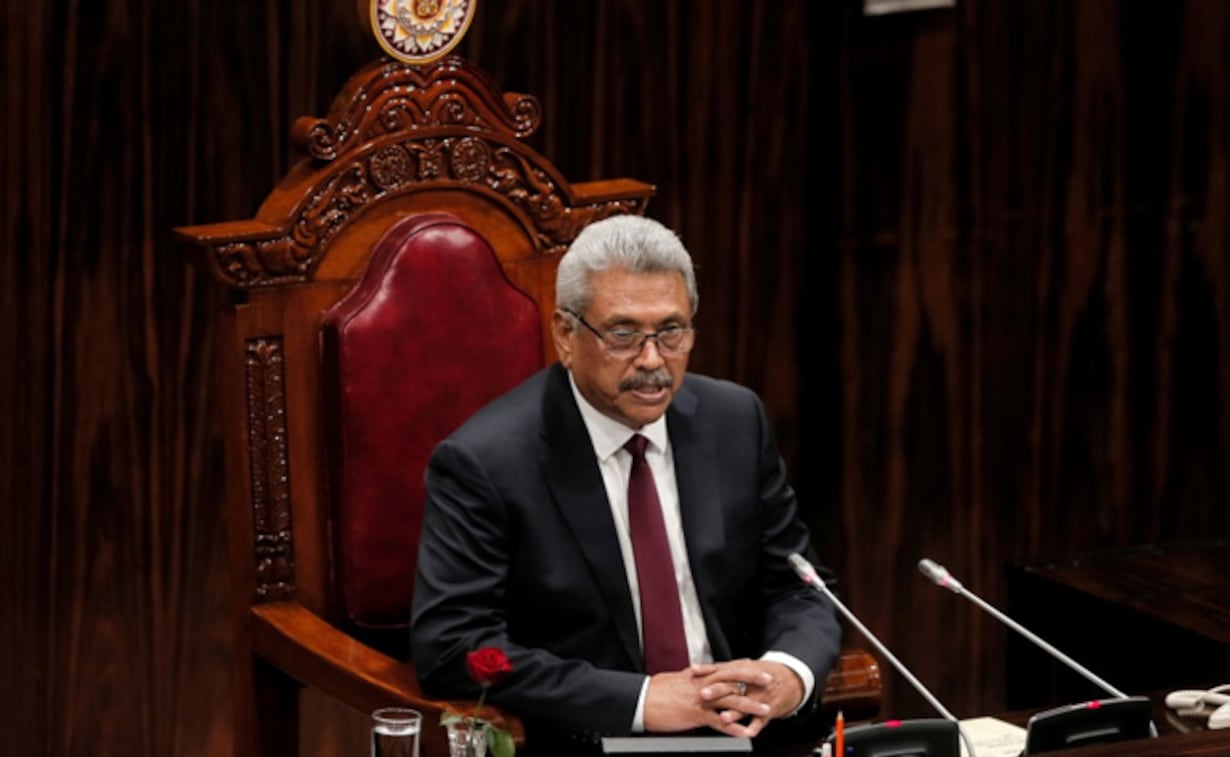 President Gotabaya Rajapaksa flees off to the Maldives with his wife, Ioma Rajapksa on Wednesday on a military private jet. However, it is confirmed that the Sri Lankan President is actually heading to Singapore after spending a day in Male, it was just a transiting point according to the sources, and has boarded a Saudi Airlines.

Moreover, Gotabaya appointed Prime Minister Ranil Wickremesinghe to serve as President in his absence. The protestors gathered on the streets as well President’s residence in Colombo, the capital city of Sri Lanka. Additionally, the demonstrators took over the PM’s office.

Furthermore, the police also fired at the mob and cannons to rest the apprehensive crowd. Many were injured as well.  They have become more restless as they came to know about PM turning into the acting President and demanding Ranil to quit and leave as well. Rajapaksa was expected to hand in his resignation on Wednesday but has now escaped.

When protesters broke into the prime minister’s private home and the president’s official residence on Saturday, months of demonstrations in Sri Lanka reached their peak.

The imposed curfew began at 12 noon on 14 July and will end at 5 A.M. on Friday, 15 July 2022. According to NewsWire, the Sri Lankan Army stated that on Thursday, July 14 that the use of “necessary force” to “defend people, public property, and the country” had been authorized.

Off the coast of southern India, on an island, is Sri Lanka. In 1948, it achieved freedom from British sovereignty. The nation’s 22 million people are divided into three ethnic groups: Muslims, Sinhalese, and Tamils. After years of a brutal and bloody civil conflict, Mahinda Rajapaksa’s administration overcame Tamil separatist insurgents in 2009, making him a hero among the majority Sinhalese. At the time, his brother Gotabaya served as the defense secretary who is now the country’s President.

The country was known for its tourism. However, the pandemic ruined Sri Lanka’s tourism sector and hence the foreign currency which is required in the procurement of importing fuel and medicine by the country for various purposes. This is now aggravating the problems which are caused by the government’s mismanagement resultant of which was the collapse of the currency.

The prices for basic amenities have shot up like food and pharmaceutical. Power failures have also become a regular thing for the citizens. Public transportations have also been frequently suspended because of the shortage of fuel supplies so that the residual amount can be prevented in the country. Although, it is true that Sri Lanka used to be one of the countries with the highest median incomes in South Asia this has all turned upside down the economy and fate of Sri Lankans just because of the poorly taken political decisions and mismanagement in terms of financial matters.

Well, the situation has been building upon for years now, it is not something that happened overnight.

Now, peaceful protests have been ongoing since March but the issue escalated, and frustrated by the situation, demonstrators entered the residence of the President, swimming in his private pool. They also broke into the PM’s office and also infiltrated the state broadcaster Sri Lanka Rupavahini’s premises.

Therefore, due to this a state of emergency was declared by the acting President Wickremesinghe, which was later canceled and replaced by a night curfew.

Ivana Trump, first wife of former US president dies at 73.

US University reports a dramatic rise in ‘Anti Hindu misinformation’ on social media.

Three people were killed after a gunman began firing in the food court of a mall near Indianapolis on Sunday, according to Greenwood Police Chief Jim Ison. The shooter was then shot and killed by a bystander.

The attack happened in the early evening at Greenwood Park Mall, according to the Indianapolis Star, and two other people were hurt.

“The real hero of the day is the citizen that was lawfully carrying a firearm in that food court and was able to stop the shooter almost as soon as he began,” Ison told reporters. He identified the armed bystander as a 22-year-old male.

According to the newspaper, the gunman was alone and had a firearm and numerous magazines of ammunition.

The names of the victims, the shooter, and the bystander were withheld by the police. At the sound of gunfire, shoppers and mall personnel fled or concealed themselves.

The Italian Prime Minister Mario Draghi has announced that he will resign from his position after the Five Star Movement (M5S) on Thursday July 14 hinting at a political crisis paving its way for early elections.

To his statement Mr. Draghi said, “The pact of trust underlying the government has failed. In recent days there has been the utmost commitment on my part to continue on the common path, also trying to meet the needs that have been advanced to me by the political forces. As is evident from today’s debate and vote in parliament, this effort was not enough. From my inauguration speech I have always said that this executive would only go forward if there was a clear prospect of being able to carry out the government programme on which the political forces had voted their confidence. This compactness was fundamental to face the challenges of these months. These conditions no longer exist.”

In 2021 a surge of political change happened in response to the previous year’s COVID-19 pandemic crisis. The whole nation went through a state of emergency forced by the government of Guiseppe Conte, supported by the M5S, the Democratic Party (PD), a small left party, and Italia Viva. However, after the pandemic hit Italy, Matteo Renzi’s Italia Viva distanced itself from the government in December 2020 leading to its fall in February, 2021.

The former governor of the European Central Bank Mario Draghi led the establishment of a national unity government and was widely supported by all major party members except a post-fascist and a small left party.

The former European Central Bank chief Draghi has met the president, Sergio Mattarella over the issue of his resignation. However, Mr. Mattarella rejected Draghi’s resignation on Thursday night and at the same time advised him to address the parliament in order to get the support he needed.

Mr. Draghi has announced his resignation on Thursday after the populist coalition ally the M5S refused to support a key bill of the government. Reportedly the Draghi government formed in allyship of this populist, the left, the right, and the central parties in February 2021 right after Italy stumbled into the corona virus crisis.

Draghi and his government won a confidence vote of 172-39 to pass the bill in the Senate despite the M5S’s refusal. The bill provides support of 26 billion euros to the consumer and industries struggling with the energy crisis. The bill also included a provision for allowing the construction of a huge incinerator for Rome’s rubbish management project which was highly opposed by the M5S.

Mr. Draghi addressed the issue of the populist M5S’s disinterest in the bill by saying, “The majority of national unity that has sustained this government from its creation doesn’t exist any more.” To which the president advised Mr. Draghi to reach parliament in order to get the solid support he needs the most.

However, if Mr. Draghi fails to gain support from the parliament to carry out his economic reform, president Mattarella can call for an early election in late September since the current parliament’s term expires on 2023.

The M5S has lost its significance in the recent local elections and strolled in opinion polls. The populist party has also cleared their stance by being in opposition to the economic reform bill. A pro-Europe party leader said criticizing the M5S’s opposition, “is not like picking up a menu and deciding, antipasto, no, gelato, yes.” Whereas the Draghi government has been efficiently performing throughout the pandemic via the virtual medium. So, the Draghi government has become a pivotal figure in Europe amid the Russia-Ukraine war and the economic crisis. Some politicians say that Draghi’s decision to resign or not is important following the unfortunate departure of British Prime Minister Boris Johnson. The whole of Europe will be looking after Italy in the coming weeks.

An enormous comet nicknamed as K2 is twice the size of Mount Everest. Another aspect to be observed is that the comet has entered in the Solar system and was all set to fly by earth this week.

The most distant active comet, Comet K2, has intrigued scientists.

The first time this mega comet was discovered and came to notice was in 2017 by the Panoramic Survey Telescope and Rapid Response System(PanSTARRS), which also explains the comet’s full name Comet C.2017 K2 (PanSTARRS). The comet, however, at the time of discovery, was 2.4 Billion km away from the sun which is approximately 16 times farther than the distance between Earth and Sun.  Scientists were shocked to discover that K2 already had a gaseous coma because comets, which are primarily composed of water ice, are typically thought to be as motionless and lifeless as rocks at this point in the solar system.

The official time for the Comet K2’s approach was 11:09 P.M. on 14 July 2022 EDT on Thursday (8:39 A.M. IST, Friday). Moreover, the fascinating fact about this gigantic comet is that its nucleus is estimated to be around 11 miles (18 kilometers) across – roughly ten times larger than most comets according to the Hubble Space Telescope.  Additionally, the halo (atmosphere) or coma has a diameter of around 81,000 miles (130,000 kilometers). It traveled 270 million kilometers (168 million miles) away from Earth (beyond the orbit of Mars). Many were able to catch glimpse of the comet through their telescopes and the pictures surfaced across the internet.

The next sight of the comet is predicted in December 2022 approaching closest to the sun and will grow brighter.

However, debates are ongoing about the right size of the comet between scientists and will continue to be so.