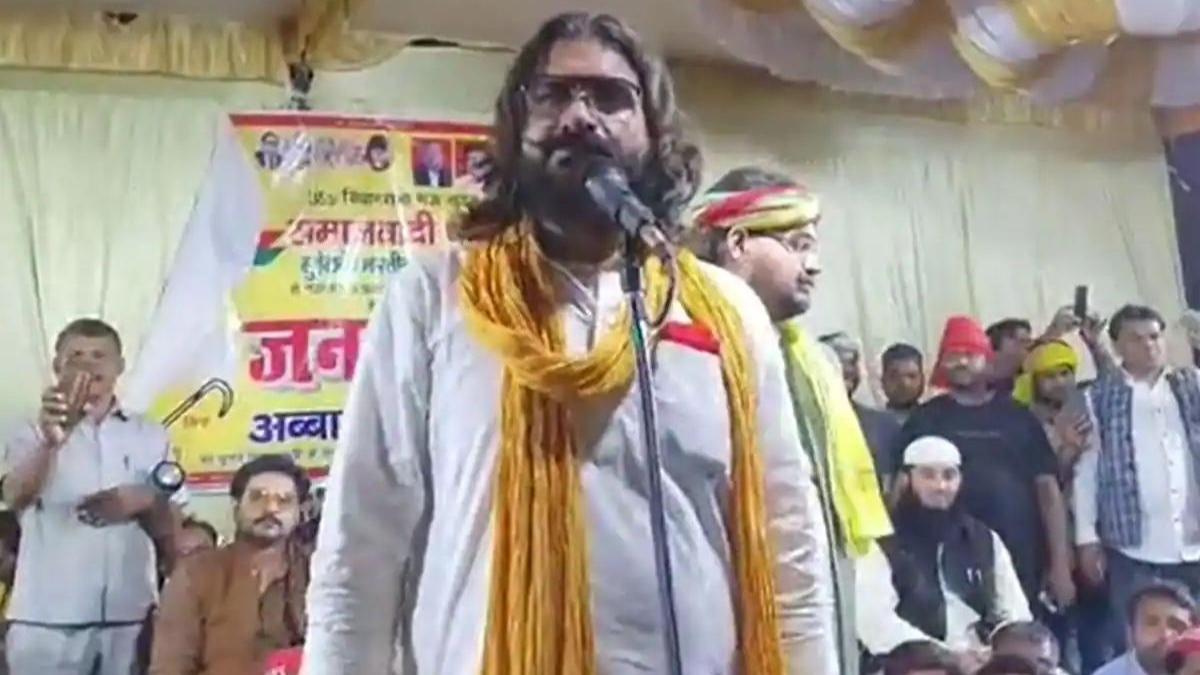 Abbas is the son of notorious criminal Mukhtar Ansari, who is a 5-time MLA from the Mau and is currently lodged at the Banda jail in Uttar Pradesh. Interestingly, Mukhtar Ansari is the nephew of the former President of India, Hamid Ansari, who is himself accused of being an Islamist.

The video of Abbas, who is contesting elections on a Subhaspa ticket, is going viral, in which he has named Akhilesh Yadav and said that there will be an account with the officials before the transfer. After the video went viral, ADG Law has ordered action on behalf of Prashant Kumar. Mau Police has registered an FIR against Abbas.

In the video, Abbas says, “I have requested Samajwadi Party chief Akhilesh Yadav to not transfer anyone (referring to police personnel) until 6 months after the elections. Those who are posted here will be made to stay here. First, there will be ‘Hisab kitaab‘ (referring to punishment based on his assessment) and only then they can be offered posting somewhere else.”

The video was shared on Twitter by BJP spokesperson Shehzad Poonawalla. He tweeted, “Open threat being given in Varanasi rally. SP workers (to) beat up cops. True face of SP alliance.” It must be mentioned that Ansari’s Suheldev Bhartiya Samaj Party (SBSP) is in an election alliance with Samajwadi Party.

After the video went viral, Additional Director General of Police Prashant Kumar took cognizance of it. After examining the video, he ordered action against Ansari. Meanwhile, the Mau police have registered a case against the SP candidate.

The Mau police have registered a First Information Report (FIR) against Ansari for his provocative speech. Charges were filed under Indian Penal Code sections 506 (criminal intimidation) and 171. A report was also handed over to the Returning Officer (RO) for violating the Model Code of Conduct.

This video of Abbas Ansari has come to the fore at a time when voting will be held in Mau in the seventh and final phase on March 7. Just before the voting, Abbas has given another weapon to the BJP to surround the SP alliance.

Recently, Chief Minister Yogi Adityanath and PM Narendra Modi surrounded the SP by reminding them of the deeds of Mukhtar Ansari. BJP is continuously claiming in election rallies that if the SP government comes, then there will be hooliganism. At the same time, it will be difficult for Akhilesh Yadav, who gave the slogan of new SP, to this threat of Abbas.

In his defence, Abbas Ansari claimed, “In the last 6 months, the administration here harassed people by lodging fake cases against them. So all this will be investigated & that’s why I’ve said it.”

Mukhtar Ansari, who was in jail in Punjab, was afraid to come to Uttar Pradesh because he

feared getting killed in a police encounter. When he was going to be transferred from a jail in Punjab to a jail in UP, at that time, he did not eat or drink anything on the way and his face was swollen with fear.

The Congress government of Punjab had tried hard to save him. The matter reached the court. Eventually, the Yogi government succeeded in shifting him to a jail in Banda.

His property worth hundreds of crores has not only been sealed and auctioned under the Yogi government but many of his shops and properties have also been demolished by bulldozers.

His assets worth about Rs 300 crore have been either confiscated or razed off. More than 100 criminals of his gang are in jail now. In addition, about 75 arms licenses have also been cancelled. Afzal Ansari now talks about the threat to the family from the Yogi government.

PM Modi campaigns for the final phase of UP elections